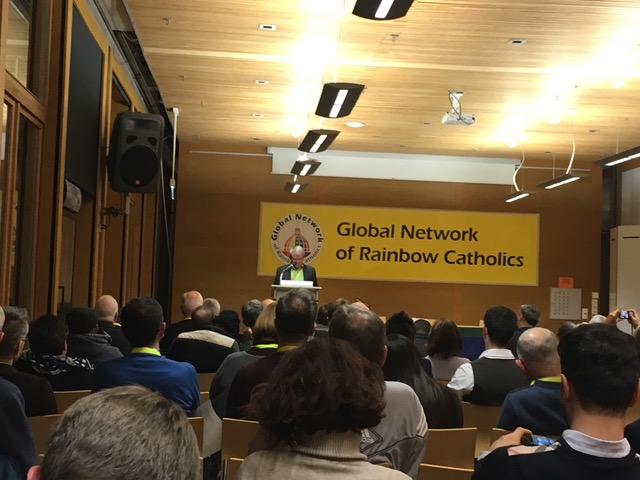 By Michael Brinkschröder at the 2nd Assembly of the GNRC. November 30th 2017 in Dachau (Germany).

Dear siblings from all over the world,

We just met Karl Heinrich Ulrichs, who is often called the first gay activist of world history. 150 years ago, he has held a remarkable speech in Munich. In 1867, he called the national conference of German lawyers to stop the criminalisation of men who are loving men. But his plea for this just cause wasn’t heard! The majority became furious and shouted him down. During his life, he wrote many texts in which he presented his view on men who love other men. He gave them the name “Urninge” as the term “homosexual” was not yet invented, but something new appeared in history. The longer he did research about Urninge, he realized that there are not only men and women who love the same-sex, but also people with other kinds of gender identities. And he also gave them specific names. He was quite clear that the human rights must also be applied to these kind of persons. And even same-sex marriage was already on the list of his political and theological ideas and demands.

In the last few months three remarkable things for LGBTIQ people have happened in Germany, three achievements which finally bring to a happy end what Karl Heinrich Ulrichs had called for, three just causes that were finally heard.

To our big surprise, this judgment was welcomed by the speaker of the German Catholic Bishops’ Conference and by two academic Catholic theologians who estimated it as sign of respect for the individual personality of intersex persons.

Let me now tell you a little bit more in depth what has happened in Germany in the last couple of years in our relationship as LGBTI Catholics to the Roman Catholic Church.

Already in 2011 we had a sense that something new was happening in the Catholic Church. Several Cardinals and bishops made new types of statements, e.g. about the necessity to include gays and lesbians in the parishes or that they appreciated love and care as positive values that were also realized in many same-sex partnerships.

26 years of papacy of John Paul II and Benedict XVI had not left over many gay and lesbian activists who still had hope that changing the Catholic Church is possible. So the few remaining gay Catholic activists in my association “Homosexuals and Church” started thinking about new ways of organizing. We founded the Catholic LGBT Committee, an informal network of eight Catholic and ecumenical Christian LGBT groups. Besides Homosexuals and Church this includes the Network of Catholic Lesbians, the Study Group Gay Theology, the Catholic Gay Priests Groups and the LGBT Caucus of the Youth Organization Catholic Young Community as nationwide organizations as well as 3 local groups in Magdeburg, Frankfurt and Munich. This Catholic LGBT Committee has become the central platform for LGBT church politics in Germany.

Homosexuals and Church started as well the project “Catholics for LGBT Equality”, funded by Open Society Initiative for Europe, for which I work as part-time project manager.

In 2012, we started dialogue with the Board of the Central Committee of German Catholics, an umbrella organization which represents more than 20 million of lay Catholics in our country. This was followed by meetings and co-operations with some of their member organisations like the Catholic Youth Federation, the Catholic Women’s organizations and the Catholic Workers Movement. These contacts turned out to be quite supportive. Not only that they gave us space in the official program of the Katholikentag, the biannual church fair in Germany, they also demanded blessing ceremonies for same-sex couples from our bishops.

We also had meetings with the bishops from Berlin, Trier and again Berlin as well as with high rank church officials in other dioceses. In the beginning of 2013, we started a series of regular annual meetings with Bishop Franz-Josef Bode, the chair of the Pastoral Commission of the Catholic Bishop’s’ Conference and bishop of Osnabrück, my home diocese. In him we found an open-minded person, willing to listen and already prepared to talk to lesbian and gay people from his time as chair of the Youth Commission.

During our annual meetings with him and usually three of his staff members, we focused on one topic per year.

2013: the improvement of the ecclesial labour law for lesbian and gay employees of the Church

2014: the place of gays and lesbians in theological anthropology or: How to overcome the idea of natural law?

2015: the opportunities of the Family Synod for LGBT people and our families

2016: the chances to institutionalize blessing ceremonies for same-sex partnerships We try to give these meetings a specific structure: At first, one or two people tell their personal story which is related to the main topic of the meeting. Sometimes this is followed by a theological or conceptual input from our side. Then there is time for discussion which is usually a common exercise to search for ways to connect principles of the Catholic tradition with the topic, but also to critically assess of what could be a possible way forward and what would cause too much resistance or is justified too weakly. Towards the end of the meeting we usually come up with a concrete proposal for a practical step forward, e.g. an in-depth training for pastoral workers and counsellors on pastoral care with transgender people.

This regular dialogue has already brought some fruits. But I want to admit, that in most cases we were not the only group in the church that had pointed into the same direction.

Another important fruit of the Family Synod and Pope Francis’ “Amoris laetitia” is a new wave of establishing professional teams and staff workers who have the official task to do pastoral care for and together with LGBTIQ people. While some dioceses like Hildesheim, Osnabrück, Limburg and Freiburg as well as our colleagues in Austria (in Linz and Innsbruck) are doing this already for many years, we can clearly perceive that more and more dioceses are currently in the process to follow this path – among them is also the archdiocese of Munich-Freising. In order to inspire this process, we have developed a concept paper on Rainbow Pastoral Work to make sure that the needs of lesbian, bisexual, trans and intersex people are considered from the very beginning. It also reflects on the contradictions between this new pastoral approach and the “old”, but still existing moral theology that condemns homosexual acts and regards homosexual people as morally somehow dubious.

I am sure that the working group on pastoral care will bring together many more examples for this new wave from all over the world, e.g. Switzerland, UK, Australia as well as the many pastoral initiatives inspired by Jesuits in recent years in Chile, Brazil, Mexico and South Africa and surely in other countries as well.

Good things need their time to ripe until they bear fruit. And we had to learn that there are issues like partnership blessing ceremonies that can’t be solved within the short period of a few years only. They need more time to ripe. Nevertheless, we are quite optimistic to see more progress related to blessing ceremonies for same-sex couples.

This year, we have celebrated the 500 anniversary of the reformation through Martin Luther. For the first time in history, this important jubilee was celebrated in ecumenical friendship. As LGBTIQ Christians, most of our groups are ecumenical or are working in ecumenical partnership. Almost all of the Protestant regional churches have institutionalized blessing ceremonies for same-sex couples. Four of them have even achieved full equality with heterosexual marriages. I think that they are good role models for the Catholic Church in Germany and their progress contributes significantly to the expectation that churches can change.