Preach: Hear a Just Cause 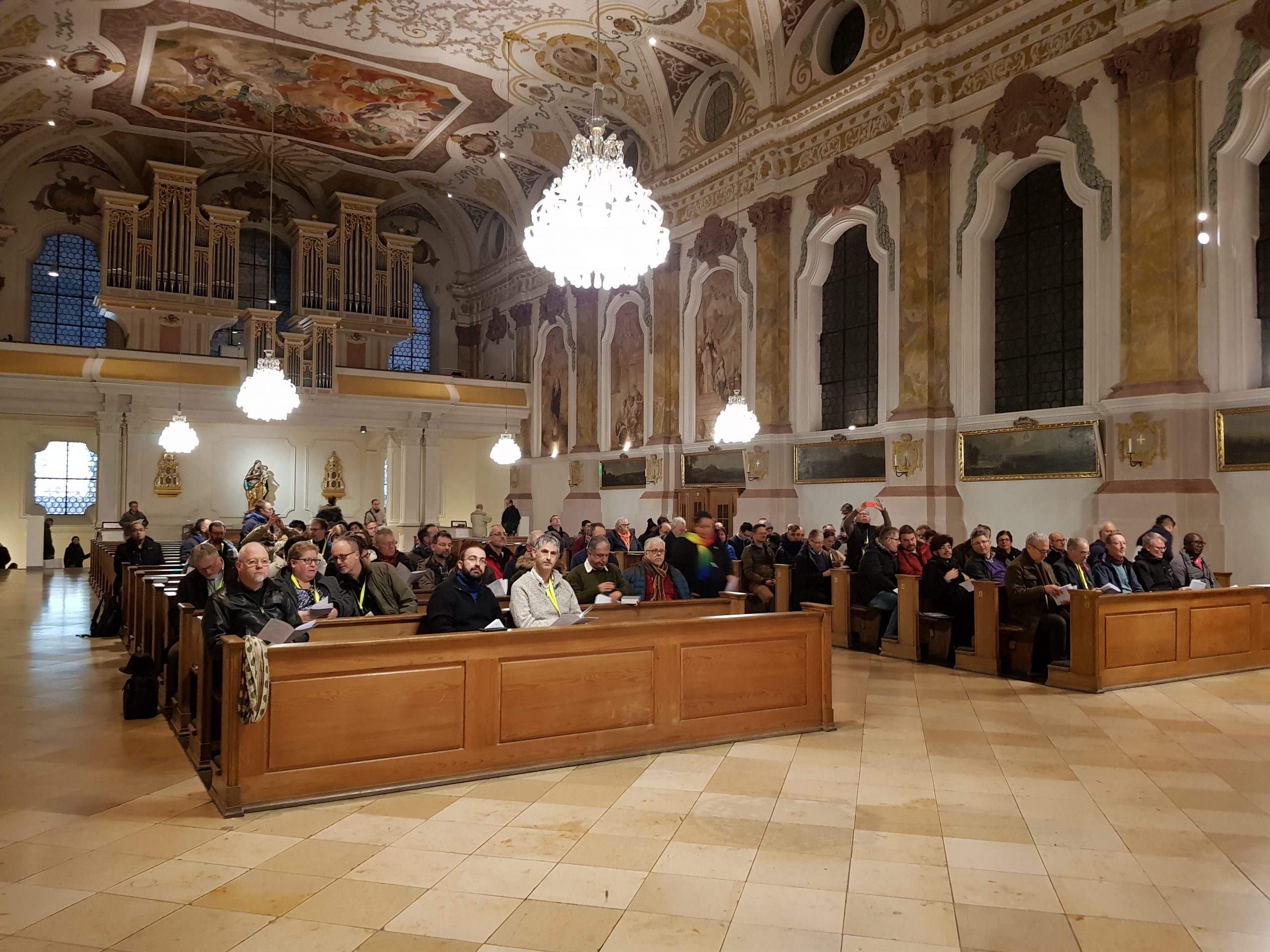 Delivered by Susanne Andrea Birke on 2nd of December 2017, during the 2nd Assembly of GNRC, Bürgersaalkirche Munich. Hear a just cause. I believe, we all know, what it means not to be heard. Asking to be heard over and over again and not getting any reaction, sometimes not even a chance to talk to those in power personally has been my experience with the upper hierarchy of the Roman Catholic Church more than once. I joined a group (mainly women) on the last day of their pilgrimage from St. Gallen to Rome to hand over a plea that no more decision will be made about women without women. There was not even one Vatican official to meet the over 400 women and men. The three bishops and the abbot, who celebrated Eucharist with us, could not change that either. I experienced the same on a local level – the bishop of my home diocese, the diocese of Chur, sees no need to meet representatives of rainbow Christians.

The silence on the criminalization of same-sex love and sexuality and the horrible violence against the rainbow community around the world feels even worse. It is breaking my heart over and over again, when I think of those dear to me having to live endangered lifes day by day. This silence is cruel and sinful to me. And believe me – sin is a word I as a theologian and pastoral worker hardly ever use.

So then I was pondering this situation of disregard, the story of the nameless greek woman came to my mind. This is the only story, when Jesus had to be convinced to help. Her plea was at first disregarded by him. She asked him to heal her daughter, while Jesus had tried to get away from the crowd, which constantly followed him. He treated her harshly and even insulted her, comparing her and her daughter to dogs. She does not back down, instead she turns his argument against him and wins him over. Not only changing her daughter’s fate by this, but making him look beyond his set limits too. Here we watch a woman fighting successfully for inclusion and equal treatment for her daughter. We see a Jesus being willing to change his mind because of one woman’s plea.

If Jesus himself did change his mind to include someone he disregarded at first, I see no reason, why the church should not be able to do so too. We will keep reminding our church and go on demanding inclusion for all of us. We have been promised a life in fullness too. Our church needs to stand up for us and make sure each and every one of us is safe and does not have to fear for his, her, their life or safety. As friend and ex-partner of someone born in Jamaica I definitely cannot be silent.

Living with her through the fears in her country of origin, then watching her having to leave, already made me sad and angry. Seeing now, that she still is not safe in the US is no better. Hearing, how she is being exploited and abused at work, leaves me feeling helpless, sad and angry once again. In all this finding community is vital. I love the way rainbow communities celebrate life and love in the midst of violence and humiliation – not denying the pain, but not forgetting about the gifts we have been given either. We are here together working, celebrating, praying, discussing, sharing joys and worries, and having fun in a rather safe place. At times even listening each other into speech. We strengthen each other by our presence, give new hope. We can feel that the promise of advent is becoming real. The Living One is right in our midst. In this way we are church, following the teaching of Jesus, while still waiting for the promise of advent to become real for us in the Roman Catholic Church as a whole.

But sometimes we do challenge each other too. This is not only about the Roman Catholic hierarchy having to listen to a just cause. Though we share a lot, we do not all face the same difficulties. We have to listen to just causes in our own community. This can be painful, but it is important. While standing up for myself against the discriminations I experienced, I also learned a lot from people around me, who asked me to listen to their cause. My ex-partner and friend let me see the world through different eyes. I went through experiences of powerlessness I had not made before. Not being able to stop racist discrimination and arbitrariness by the German border police, was one. Moments like these gave me an idea what she was going through day by day.

Sometimes I was thinking this really is too much to bear. At the same time I was very conscious, that while I was able to make a choice on this, my ex-partner never could. She had to face it all, no matter how she felt about it.

It was also her talking to me on these issues, which helped me see more. Though we usually might identify more with the woman having to argue with Jesus, we sometimes will find ourselves in the role of the disciples trying to get rid of her. Or we might find ourselves in the role of a rather unwilling Jesus not wanting to listen to a plea, which he did not see as his business. Sometimes we might just be tired from all the things needing to be done, wanting nothing but a break. Sometimes we might think, why should I care, this is not the problem we are supposed to be dealing with, this is not important. But if we want to build a community of support we have to take into account that some are more vulnerable than others. Trans women of colour are living in even greater danger than white trans women do. Sexual harassment or living as a migrant might not look like a subject having to be addressed by a network dealing with LGBTIQ+ issues. But these might be just causes we have to listen to and deal with.

So let us hear once again, what Paul wrote in the year 54 to the community in Corinth. In his letter Paul talks about this community and the people in it being holy, because together they form the body of Christ. These words are also meant for us. For us, who are here together now, during this service, the assembly of the GNCR and the communities we come from:

“I always thank my God for you because of his grace given you in Christ Jesus. For in him you have been enriched in every way – with all kinds of speech and with all knowledge – God thus confirming our testimony about Christ among you. Therefore you do not lack any spiritual gift as you eagerly wait for our Lord Jesus Christ to be revealed.”