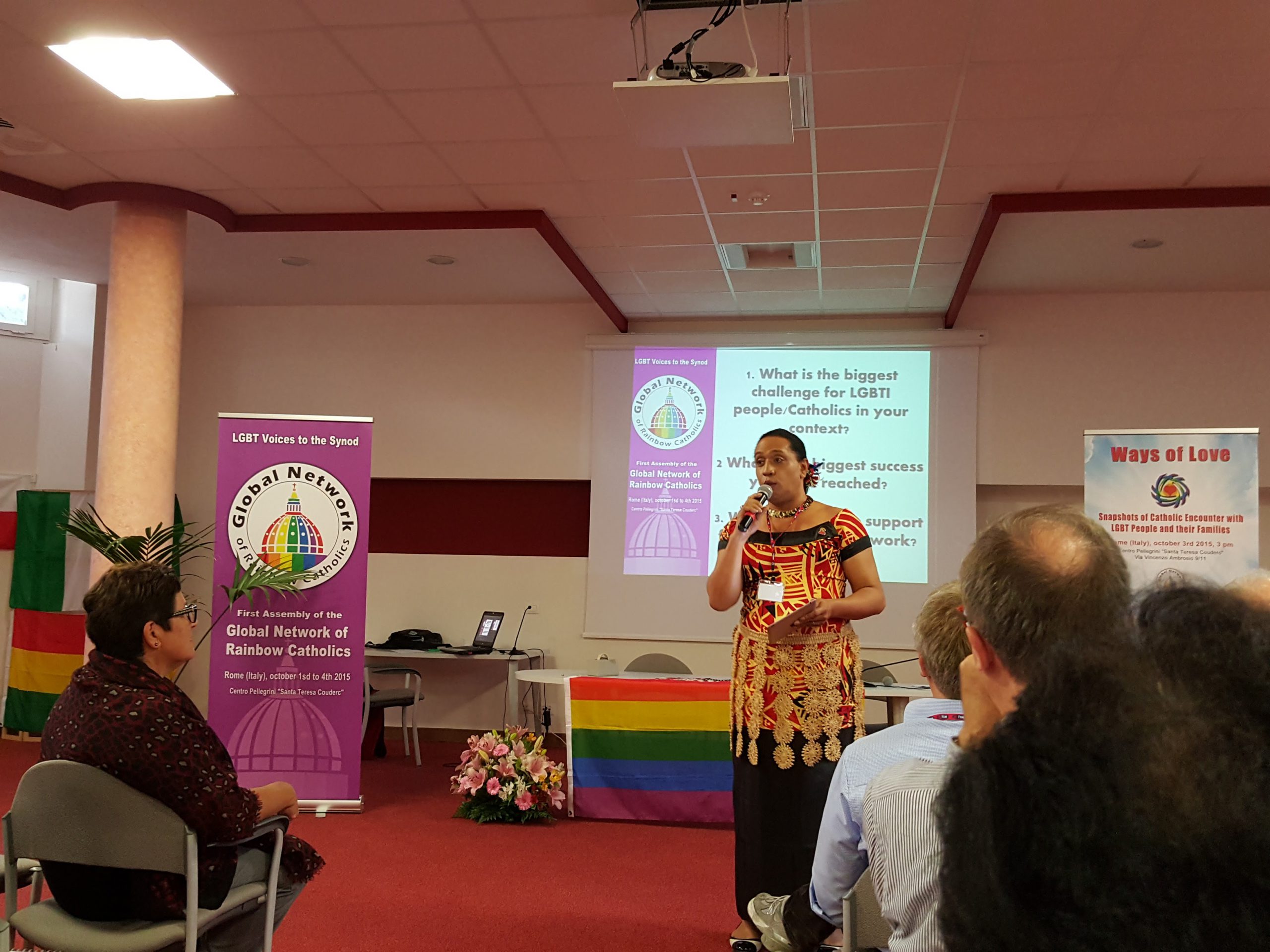 The unique and rich gifts of LGBTI people for the Church comes from the diversity of Sexual Orientations as well as Gender Identity.

Transgender (T) and intersex (I) persons, same as lesbians (L), gays (G) and bisexual (B) people, do not choose their gender identity. Gender identity is discovered, not chosen. Human nature has proven to be more diverse than the usual definitions of heterosexuality and the connection between gender and the biological sex recognized at birth. If we want to fully understand the definition of Gender Identity we must also know the meaning of being a transgender or intersex person:

Most transgender and intersex people walk the same path of coming out, like that of LGB people, so the idea of a “choice”, with all the risks and potential rejections that involves the process, is hardly an option but indeed the result of a long inner and personal process. If schools or any other institution taught that gender is a choice, as the Pope argued in a meeting with Polish bishops during the WYD in July, then indeed, the curriculum would have to be changed. The hard work and efforts towards the inclusion in the society of transgender and intersex people, in school education programs on gender identity, are not part of a postmodern trend or a biased lobby that searches to review the traditional teachings of the Church or to destroy the fabric of society. When the Pope makes references to the erroneous concept of gender ideology, he creates confusion and misunderstanding inside and outside the Church.

The reality of transgender and intersex persons has been a part of humanity´s history from the beginning; evidenced in artistic, literary and numerous other representations in many cultures and religions around the world, whether Christian or not, e.g. America, Polynesia and Southeast Asia. The major difference is the current available research and evidence, based on serious biological, psychological and psychiatric studies, that supports the idea that a person´s gender identity might differ from his or her biological sex at birth.

We understand the big advances and signals shown by Pope Francis, regarding visibility and acceptance for LGB Catholics (Lesbian, Gay and Bisexual), inside the Church. Sadly, transgender and intersex Catholics, and their families have not yet received the same treatment – despite the Pope’s meeting with a transgender man from Spain at the beginning of 2015.

For example, to believe that inclusive educational policies will make children or teenagers believe “that everyone could choose their own sex” is an erroneous reading and understanding of scientific evidence and interpretation of what transgender and intersex people are. Bullying, depression and suicide, especially among teenagers, is tragically high among transgender persons (41% higher compared to other teenagers of a similar age). Therefore, addressing this topic in schools has to be the very place to attempt to protect young, vulnerable lifes. Messages like the one released by the Vatican, only add to the pain and isolation of TI Catholics, reinforcing prejudices and discrimination in countries or regions where the Church has sometimes even supported or been a silent witness to the persecution and criminalization of LGBTI people and their families.

The life of a transgender woman in the Church Joleen J. Mataele leading the morning prayer during the Ways of Love Gathering in Rome in October 2015

Joleen J. Mataele is a Catholic transgender woman from Tonga whom we all had the pleasure to meet during the inaugural meeting of the Global Network of Rainbow Catholics. For many people, she is a living example of the diversity and richness that LGBTI people could bring to the Church. Usually the LGBTI Catholic movement is led by gays or lesbian, so her presence among us provided a new and holistics perspective of what full inclusive pastoral care should be for everyone.

During the 4 days event, she gave witness of the LGBTI Catholic reality in her home country and played an active role in leading morning prayers, mass and kept up the energies for everybody during the pressing agenda of the event. She considers herself as a Fa’afafine, which is how Tongan society describes transgender women. “In my country the concept that your male and female role should be consistent with your biological sex came with western colonialism. For us your gender expression is something natural that effectively is discovered trough your life´s journey and is mostly respected and accepted by our traditional culture”, says Joleen when asked about how it is to be a transgender woman in Tongan society.

She is a dedicated activist as Chairperson and Co-Founder of the Pacific Sexual Diversity Network (PSDN), Advisor and Founder of the Young Catholic Transgender Association (YCTO), Public Relation Officer of the Catholic Women´s League Committee (CWLC) and the Choir Conductor in the Nuku’alofa Parish Youth. “I´m more than an activist. I consider myself also an entertainer, singer and a lover of the life that God has blessed me with. If we are here, together, to bring fresh new air to the Church, we should be happy”, she says whenever people ask her about her natural charisma and personality. She also said that there is no problem for a LGBTI person to join in the regular aspects of Catholics pastoral life in Tonga. “When we celebrated a Vigil to honor the Orlando shooting victims, there were many members of our LGBTI pastoral care group there as they are also part of the Catholic Youth, which is one of the major organizers”.

“I´m also the proud mother of 5 children. Each different and unique. I know and understand how it feels to be someone who is not part of the standard gender identity models, specially when I´m out of my homeland, but that doesn´t restrict me of being a Catholic, woman and mother”, she concluded.

Even if the transgender and intersex scenario for TI Catholics seems delayed, compared to the LGB Vatican or Catholic agenda, there are many people who are raising their voice for advocacy and inclusion. Most of the traditional sexual diversity pastoral care groups are moving from their initial definition of LGB Catholics to LGBTI Catholics. This responds to the full understanding that sexual orientation and gender identity diversity are part of the same route of inclusion and justice on the Church. The presence of transgender and intersex members is still very limited, especially in Western countries, as their stories of suffering and discrimination deeply assigned to them from early stages of life and which are frequently linked, directly or not, to the Church.

Another reason is that only a few religious men and women from the hierarchy have provided direct pastoral care for them. They themselves declare “gender identity is something that we don´t speak of or discuss on the seminary as we do with other subjects like homosexuality. It was a whole new world for me when the first transgender person came for guidance and pastoral care assistance”, says Father Pedro Labrin SJ from Chile. But good news are coming from priests and nuns who are expressing their empathy for inclusion of transgender and intersex people in the Church. Along this lines, priests and nuns like Father Bryan Massingale from the Archdiocese of Milwaukee have made strong statements such as “The Church must not abandon transgender Catholics!” on August 2016 to express their support and empathy for TI Catholics.

Currently on the frontier line there are even religious, men and women, that are openly taking on this personal challenge. The testimony of Sister Monica Astorga, a Carmelita Descalza Nun in the Neuken County of Argentina is a living testimony of this. She has been blackmailed, due to her public support for transgender women, but she still claims “The one who is making a mess in here is Me”, referring to a talk she had with Pope Francis on 2015.

We earnestly hope and pray that the Church will show more mercy and respect for TI people. We also wish to express our readiness to support the Church in this process. We willingly desire to share real life stories and testimony of transgender and intersex Catholics and their families. They will inform and advise us about their faith, lives, identity, suffering and hope, all in the spirit of the Pope’s Apostolic Exhortation.

We would like to recall that the Church is the “House for Everybody” and this includes our transgender and intersex siblings in faith. We are all on the same search for recognition, inclusion and justice in our Church. We walk the same path for a more truthful merger between our faith and our sexual orientation and/or gender identity.