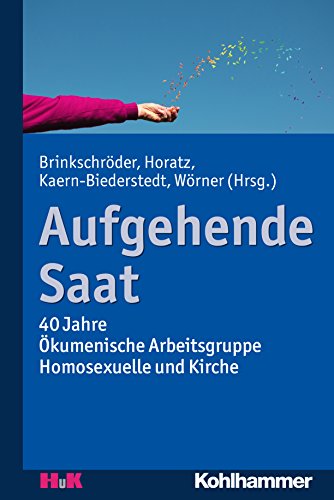 Find here the full list of Catholic Books on LGBTIQ History of our community and their families in the Church.

Rising Seeds (Original: Aufgehende Saat) – Author: Michael Brinkschroeder. German : On 2017 HuK (Homosexuelle und Kirche), the LGBTI Ecumenical Christian group from Germany, celebrates its 40th anniversary. Stories about its history, activities and successes can be read in the book that was presented in May 2017 during the Kirchentag, a biannual church congress, in Berlin.

Christianity, Social Tolerance, and Homosexuality – Author: John Boswell. English : The historical breadth of Boswell’s research (from the Greeks to Aquinas) and the variety of sources consulted make this one of the most extensive treatments of any single aspect of Western social history. The Book, still fiercely relevant today, helped form the disciplines of gay and gender studies, and it continues to illuminate the origins and operations of intolerance as a social force.

NEW! Hidden Mercy: AIDS, Catholics, and the Untold Stories of Compassion in the Face of Fear – Author: Michael J. O´Loughlin. English : Set against the backdrop of the HIV and AIDS epidemic of the late twentieth century and the Catholic Church’s crackdown on gay and lesbian activists, journalist Michael O’Loughlin searches out the untold stories of those who didn’t look away, who at great personal cost chose compassion–even as he seeks insight for LGBTQ people of faith struggling to find a home in religious communities today.

Under the Same Sky (Original: Bajo un Mismo Cielo) – Author: Karina Bárcenas. Spanish : This work constitutes a contribution to dialogue on a subject that has gained great importance for contemporary societies: the search for equality in difference. The reflection is located in the ways in which religious identities are constructed: along with sexual orientation and gender identity, but without neglecting the demands in which a political movement as heterogeneous as the LGBT converges.

NEW! We are Here for Communion (Original: Viemos pra Comungar) – Author: Cris Serra. Portuguese : A book that introduces the “LGBT Catholics” Brazilian Groups and the strategies they adopt to position themselves and remain within the ecclesial field, pointing to the reappropriation of the religious in terms favorable to freedom and sexual diversity. It notes that the visibility and appropriation of space not only reconfigure the ecclesial environments but, in this reorganization, they even seem to establish new orders throught contemporary history.