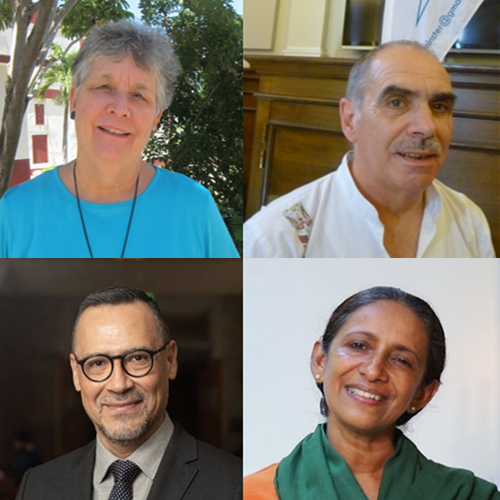 July 22, 2021. The Theological Committee of the Global Network of Rainbow Catholics (GNRC) has recently released a document that challenges Catholics to reconsider the ways in which theology of sexuality and gender is done. GNRC brings together Catholic groups and individuals who work for pastoral care, justice, inclusion, dignity, and equality for LGBTIQ people and their families in the Roman Catholic Church and wider society.

The document, entitled “Catholic Sexual Conversations in a Diverse Church,” calls on theologians, pastors, and all members of the Catholic community to start this change from an assumption of goodness and holiness, and to trust the wisdom of individuals who identify as LGBTIQ. Its approach is consultative and communal, in contrast to the usual focus on doctrine and the assumption of monogamous heterosexual marriage as the sole standard for human sexual relationships.

At the launch event, Martin J. Pendergast of England, a member of GNRC’s Theological Committee who helped draft the document, noted the group was “frustrated by so much activity within LGBTIQ other theological circles which continued to focus on challenging the polemics of doctrinal statements promoted by hierarchical and institutional bodies within the Roman Catholic Church, rather than working from LGBTIQ Catholics’ liberating praxis, spirituality, and theology towards a new vision.” He said the group’s goal was to create “a process of listening and walking together, a developmental and evolutionary journey, rather than drawing up yet another fixed-in-time document.”

Mary E. Hunt, a U.S.-based committee member and one of the writers, noted that it is essential to change how theology of sexuality and gender is done in order to change the content. Hunt noted that, “We value the experiences of healthy, good, natural, and holy love among LGBTIQ people which are routinely dismissed in theological discourse.” She noted the document calls for engagement, for an assumption of equality of rights and responsibilities, and for recognition that the social and religious context varies greatly for people as they strive “to build robust, inclusive, and safe communities.” She outlined the five principles on which theological conversations about sex, sexuality, and gender must be based, concluding, “We do not ask what the hierarchy is teaching, but what the Holy Spirit may be saying through the lives and loves of LGBTIQ people.”

During the on-line launch event, two theologians who had not participated in the development of the document offered their thoughts. Kochurani Abraham of India noted that some engagement with institutional, doctrinal theology remains important, and urged GNRC to “(c)ritique/challenge the defined gender binary and the consequent hetero-normativity that is foundational to Christian anthropology in Catholic teaching.” She wondered if this document could mark the emergence of a “Rainbow Theology,” one that could be broadly inviting because it “opens itself to ever widening horizons,” and “could help deconstruct and re-envision conventional theological categories.” She urged GNRC and its members to “assert the truths of our lives and our understanding of God with greater boldness and freedom.”

Mexican theologian Carlos Mendoza Alvárez reflected on ways the GNRC statement could be used in an intersectional way, to address multiple identities and moral concerns. He urged that GNRC intentionally cross boundaries, having members from radically different places and with different identities listen carefully to each other, and ensure that our theological work reflect the reality of diversity. He wondered how this work could shape and be integrated with theology focused on the social and ecological crisis impacting so much of the world, especially those who are poor and marginalized. Mendoza Alvárez also encouraged the group to do more work on how this framework for theological thinking could address both the causes and potential remedies of structural violence against LGBTIQ people.

Following the theologians’ reflections, participants in the online event worked in small groups to discuss how this document could be used in their own countries and groups. They then brought questions back to Theological Committee members about theology of sexuality and gender, modelling a process of dialogue and engagement.

The document Catholic Sexual Conversations in a Diverse Church is currently available in Chinese, English, French, Portuguese and Spanish. The recording of the launch event where the theology of sexuality and gender was reviewed can be found at GNRC´s YouTube Channel .

For more information about the statement to urge changes to how theology of sexuality and gender is done download the booklet “Catholic Sexual Conversations in a Diverse Church” or please get in contact with: