Memories and Hopes from our Fourth Assembly 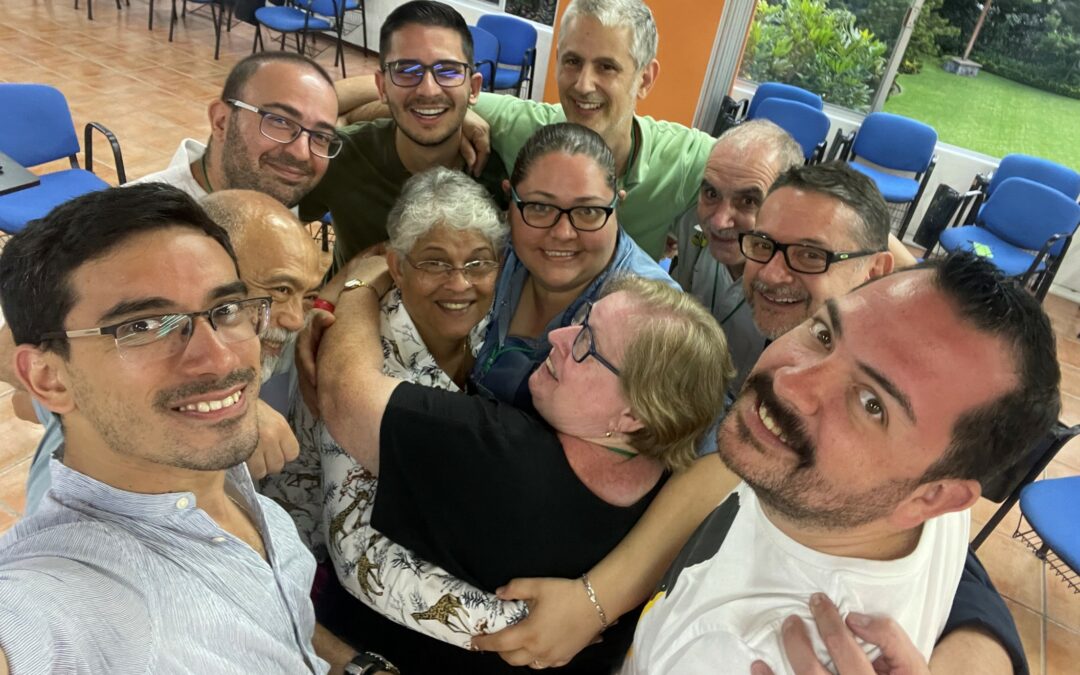 Let´s open our hearts through the expressions of emotions and thoughts present in the Fourth Assembly. 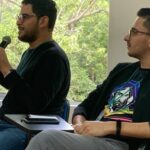 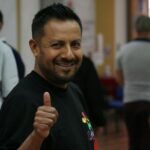 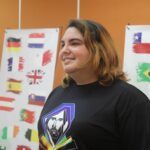 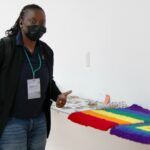 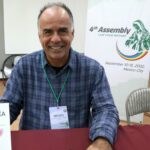 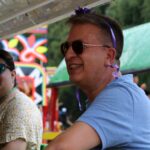 “Participating in the 4th Assembly of the GNRC has been an experience that has allowed me to meet brothers, sisters and brothers from various countries and learn about their experiences being rainbow Catholics and their communities and thus generate inter-community bonds of support and mutual help. And of course it has allowed me to celebrate and share the faith in one of the largest Marian shrines in Latin America, and there with the Guadalupana we could all recognize ourselves as her diverse children, full of dignity and love of God.” Ines Pujol from Espacio Seguro Católico (San José, Costa Rica).

“The 4th GNRC Assembly in CDMX has been an experience full of accents, skin tones, eye color and different ways of praying. Diversity in its purest form… The work in commissions, the workshops, the debates and spaces for the exchange of ideas and community experiences have been a laboratory for learning… Congratulations to the organizing team and to GNRC for being the common home of the rainbow communities of the world.” Luis Mariano González from Crismhom (Madrid, Spain).

“It was a great blessing to participate in the 4th GNRC Assembly. It is encouraging to meet people from all over the world involved in LGBT+ inclusion and citizenship in society and the Church. We always strengthen each other. We received a message of support from the president of the Episcopal Conference of Mexico. We celebrated Mass at the Basilica of Our Lady of Guadalupe, the national shrine dedicated to the patron saint of Latin America.

More than two thirds of the church was occupied. At the beginning of the celebration, the GNRC group entered in procession with the celebrating priests and took a prominent place in front of the altar. The emotion was very strong. We felt that we were children of God and of the Catholic Church, loved and supported. Praise God, with the dear mother and lady of Guadalupe.” Fr Luis Correa Lima, sj (Rio de Janeiro, Brazil).

“It’s a space where I felt alone coz I was the only black person but gladly the people present made me feel at home.” Joanita SSenfuka from FARUG (Kampala, Huganda). Note from GNRC: Due to logistics and finnantial needs, the presence of communities from Asia Pacific and Africa was affected in comparison to the two innitial versions of the gathering. GNRC will keep working and aims to be a more inclusive space not only during the Assemblies but in the regular network operation for all our regions.

“The GNRC Assembly in Mexico City meant hope, love, fraternity, and is an example of perseverance of our siblings who have given their service for the LGBTIQ Pastoral Care work in the Catholic Church.” Gonzalo Vilchis from Efetá (Mexico City, Mexico).

“The assembly meant hope, as I realized that the Holy Spirit stirs in many hearts around the world the same inclusive mission; it meant community because I was able to come in contact with wonderful, passionate and proactive people with the desire to build the Kingdom of God; and it meant a challenge to continue working for our communities.” Arturo Retana from Espacio Seguro Católico (San José, Costa Rica). 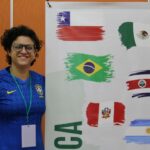 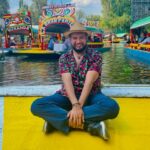 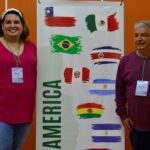 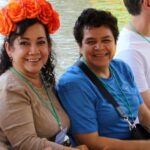 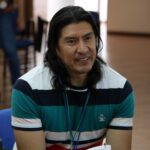 “The 4th assembly was very emotional as it showed the power that community building has. The discussion about the participation of women, the struggle with our allies, about spirituality and possibilities for action, made me renew my hope and my motivation in pastoral work. Its celebration in Latin America also made a huge difference, to make me feel part of this movement, realizing that our Latino siblings feel and are with us in the fight.” Isabella Tymburibá Elian from Diversidade Católica no RJ (Rio de Janeiro, Brazil)

“The assembly offered a broader view of masculinities and the characteristics of each orientation and identity in order to understand and include us as Catholic believers. The assembly fostered optimism and energy, we felt the presence of God telling us that he is with us and that we continue in our mission of encounter and evangelization within our condition as LGTBIQ+ persons.” Miguel Jaimes from Comocad (Lima, Peru)

“For me the 4th assembly has meant the ideal opportunity to meet again with those of us who work shoulder to shoulder in the construction of the Kingdom of God, besides the fact that especially this assembly gave the opportunity that the hierarchy for the first time sat down to listen to us.” Eduardo “Lalo” Andrade from Colectivo Teresa de Cepeda y Ahumada (Mexico City, Mexico).

“Participating in this 4th assembly of the GNRC has been one of the most important experiences for our marriage and will remain in our memories. Sharing every single moment, meeting together people from so many countries, with different realities, receiving the blessing for the community in the Basilica of Guadalupe and knowing and feeling part of this great LGBTI+ family without borders. As sons and daughters, beloved of God, it has strengthened us, not only personally, but also as spouses.” Maria and Veronica from HAVAHINAM (Coahuila, México)

“It is always a strong and overwhelming experience to (re)meet representatives of Catholic LGBTQIA+ groups from different countries. We are sure that we are not alone in this journey and that little by little our struggle, our longings are advancing. Cultivating spirituality following in the footsteps of Jesus Christ, supported by the treasures of the Catholic tradition, strengthens and pushes us to build the Kingdom of God starting with the Church itself.” Lula Ramirez from Grupo de Acao Pastoral de Sao Paulo (Sao Paulo, Brazil). 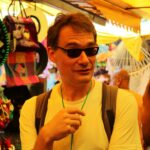 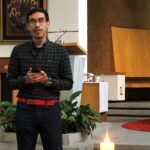 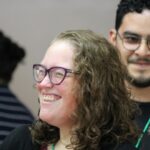 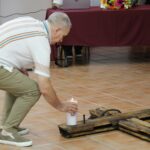 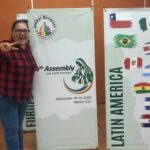 “I was impressed by the depth of conversations we had at the Assembly and the friendships we were able to form within a few days.” Thomas Bartsch from Quest LGBTI+ (London, UK).

“This 4th assembly was an event from which I left with many feelings, memories, friendships and work. With the main task of “Listening” to know where to start from in education and formation, and to grow, strengthening our networks and bridges. I highlight the unforgettable moment of the mass celebrated in the Basilica of Guadalupe.” Ana Ruiz from La Viña (Sonora, Mexico).

“An impulse to continue innovating in the creation of the Kingdom of God. An affectionate hug given and an even more affectionate hug to be given. These days were a constant snuggle of support and learning to move forward with our work, of which we should be more than proud.” Miguel Cortes from Padis+ Chile (Santiago, Chile).

“The Assembly was a powerful experience of community, prayer and solidarity. I am leaving the assembly uplifted in spirit, memories and ready to continue the work.” Meli Barber from DignityUSA (Indiana, USA).

“When we launched the Global Network of Rainbow Catholics we did not realise how prophetic we would be in our journeying together – but we did not call it Synodality then! Now that LGBT+ Catholics are so prominent in calls for reform in the Synodal Journey, through being named in national submissions, this was a key aspect of our 4th Assembly.
Mexico City showed how LGBT+ Catholics can be a gift to the whole Church and not a problem to be solved, as we become more honestly a One, Holy, Catholic, Apostolic, & Synodal Church.” Martin Pendergast from LGBT+ Catholics Westminster Pastoral Council (London, UK).
Find more pictures of the most iconic memories during our Fourth Assembly here.