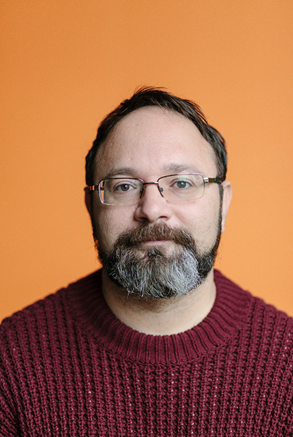 Misha Tumasov (43) from Russia is a teacher and human rights activist. His life dream was to become a priest: “When you are speaking about the love of God, you become like a battery of love.” As a gay man he was forced to choose different ways.

I was wishing to be a priest since I can remember

I was wishing to be a priest since I can remember. I was 17 when I entered the seminary in Moscow. When I realized that I am gay, long struggle inside of me began. Until my twenties I didn’t even know gay people existed. I thought that everything I felt towards my male friends was just a deep friendship. I had no sex with my friends at that age. For me it was just a deep emotional connection and nothing more. After three years I could not cope with myself and with my sexuality anymore, so I decided to quit the seminary.

Later, I realized that probably I should go on. I didn`t know any other job suitable for me, simply because it’s very difficult for me to not speak about God’s love to people. When you are speaking about the love of God, you get this feeling that you are penetrated with love. You become like a battery of love. When you are speaking about love you become a battery which is getting recharged. I really would have loved to become such a transmitter, such a mediator for God’s love.

What is the difference between heterosexual and homosexual men in celibacy?

I went back to the seminary. After a few years I opened up to my bishop and told him that I am gay. He said, that I couldn’t go on with my education anymore. This seemed quite strange to me, because I didn’t see the difference between heterosexual and homosexual men when they have to practice in celibacy as in the Catholic Church. But anyway I was told to quit my theological education. I was 25. Since I was 15 I was very deeply involved in the church life. When I was told to quit the seminary, it felt like a form of exile. I felt like losing the ground, like I had nothing under my feet. Everything in my life was connected to church, the church was much more important to me than my family.

After quitting the seminary, I studied to be an English teacher. I still wanted to be involved with the church. I moved to a different city and got engaged in the Catholic youth work there. When we had a youth meeting sometimes we were allowed to stay in church overnight, because the events that took place could go on until night time.  At some point I announced to the priest that I was gay. From that moment on I wasn’t allowed to stay overnight with the others anymore. The priest offered to give me some money to take a taxi to go back home. It felt like he considered me to be something like a sexual beast or a rapist.

I started a Catholic LGBT community. The main idea was to meet and pray together. I failed with that, but I succeeded in creating an LGBT organization with not only Catholics, we are all God’s people in any way. The people there are looking for freedom, for love and for justice. They are my parish for me.

In Russia the state does not want to pay attention to the issues of LGBT people. They don’t even want to accept the existence of hate crimes. They never investigate those kind of crimes. They simply pretend to not see us. There are many crimes against LGBT people. In the Chechen Republic the authorities organized concentration camps where gay people were tortured and killed – by the local police and the government! This was 2017! My organisation was part in investigating this horrible crime.

As for the rest of the country it is not as severe as in that region. But it is also the local government that doesn’t want to recognize us at all. We have a law, which is called “Gay Propaganda Law” that was adopted in 2013. It means we are not allowed to demonstrate LGBT people as role models for young people in front if minors. But because there could be minors everywhere you can’t talk about LGBT people in a positive way anywhere. If you are caught doing so you will be fined. The fine depends on the person or the organisation, and if it is done online or publicly for example, it could be up to 15.000 Euros. A friend of mine who is straight, is a supporter of LGBT people and human rights in general. She was accused of violating this law because she posted two articles of the “Guardian” about same sex marriages in Ireland. She had to pay 1000 Euro.

There is some trend in the human right movement in Russia. Not just LGBT, because it is not just LGBT people who suffer in Russia, but human rights in general. The opinion is that we are not willing to follow stupid laws like that. Some changes in the world give me hope for the future. Here and there we can see how people achieve equality. Not just in Europe, but also in parts of Asia, Taiwan for example. Finally we got the same sex marriages in some countries. So it will probably go step by step. I don’t know how long it will take in Russia.