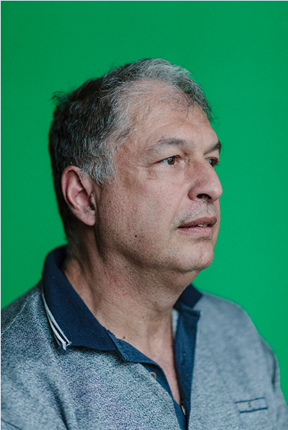 Luiz Ramires (57) from Sao Paolo, Brazil works as an indicator, training teachers and principals on gender and sexual diversity. At the moment he is doing his PhD in sociology of education.

Becoming a priest to not commit a sin

When I first realized I was homosexual it was hard for me. I started to feel attracted to other men, but I had been taught it was a sin. I come from a strong Catholic background. I knew people in church would describe homosexuals as terrible people and sinners who will go to hell. I was struggling to accept my feelings. The only solution seemed to not be sexually active. For that reason, I started to study philosophy and theology in order to become a priest. The problem is: as a result of the denial, your desires will become even stronger. At university I was still repressing my gay feelings, but there were many handsome students around me.

I suppressed my feelings because of church for many years until someone pointed out to me that it is not mentioned anywhere in the Bible. If it was so bad in God’s eyes, wouldn’t he have addressed it? It was never the key message of Jesus’ teachings. It is a question of morality and moral changes over time. I started to understand sexuality and being gay in a new way. After my studies I didn`t become a priest. Instead I moved from Sao Paolo to Rio de Janeiro for three years. The time in Rio was important for me as it was during those years that I came out of the closet. I would go to clubs and gay bars, which really empowered me. I also moved to London for one year and got in contact with LGBT organizations. Once I moved back to Brazil I felt like there had to be something we could do and I found some LGBT organizations in Brazil. That’s how my life as an LGBT activist started.

“Did you make a choice to be heterosexual?”

Today, I am giving trainings to teachers and principals on gender and sexual diversity. I explain the meaning of sexual orientation and gender identity and that those things aren’t choices. I usually ask them if they can remember what happened to them in their teenage years: “Did you make a choice to be heterosexual?” I think it is important to make people see things through someone else’s eyes. We should spread this kind of discussions by organizing seminars, meetings, and conferences.

The Catholic mindset has a powerful effect

In Brazil we had the advantage of homosexuality never being criminalized. You have some restrictions in the military. If two men were sexually intimate they could get expelled. In society in general there is no legal instrument to forbid homosexuality. On the other hand you have a very sexist and homophobic society. Only in the year 2017, there were 445 killings of LGBT people in Brazil.

Two thirds of the population is Catholic, this mindset has a powerful effect. Many people believe that God created men and women to be together and have children. Recently people are becoming more open: ten years ago surveys found that 48 percent of people were in favour of gay marriage and now it is already 55 percent.

When you talk to other Catholics who are not part of the religious hierarchy but just regular faithful people you will find: they do not have that many prejudices. Sometimes they don’t understand what is going on, but most people are very welcoming. In their point of view it is okay to love another man as God is all about love. So we just need to work on more and more people having this opinion and attitude towards LGBT people. All together we need to change the church and in this sense we can help the church to change the world.