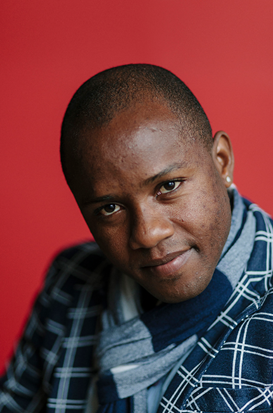 John Justin Kashiha (32) from Tanzania has a university degree, but he already lost five jobs because of being gay. The criminalisation of his sexuality brings a lot of hardship into his life: “Sometimes I would like God to show me how to deal with being rejected and discriminated.”

“You know, you can be who you are”

I was nine years old when I told my mum that I am gay. She thought I am having a demon inside of me. She sent me to churches, even to witch doctors, healers and in the hospital. I was suffering a lot from the way my mum was reacting to the situation. But now, I can understand how she was feeling. It must be very difficult to understand a sexual orientation if you are not part of it. We continued talking, she kept on listening to me, and eventually she told me: “You know, you can be who you are. All you need is to understand the context you are living with, and besides, respect yourself so that also others know how to respect you. But remember: you need to study hard, and you need to work hard, so that no one can do any harm to you.” This is what I did. I have a master degree in community development and public health, and I am a PhD candidate now.

The society is highly homophobic

Even for my mum it was not easy to understand: There is no information related to be a gay or a lesbian in Tanzania. My mum didn’t go to school long enough to be able to transform the information from the internet. So she only had the prejudices in mind which she had heard talking about. She was really struggling hard to accept my sexuality. In Tanzania in general the society is highly homophobic and highly discriminating. I was lucky because I had a very close relationship with my parents, but I know there are many other LGBT-people who are struggling much more to come out to the family members.

Criminalization leads to a higher rate of HIV and suicide

The law in Tanzania judges us as criminals officially. It is still illegal to have same-sex intercourse. Recently, many activists were arrested. As the days go by, the situation is becoming tougher and harder. It’s getting worse. It puts people on the risk, not only the risk of HIV, but also on terms of violations and sometimes suicide. People suffer with a lot of trauma, because they don’t have anyone to talk to. People are tortured, beaten up in the streets, they are blackmailed. But they also get rejected for public services, for example. You might be refused medical care in the hospital, because they say “this is not a hospital for gay people”. Obviously, there is not hospital for gay people, but now, some organisations try to provide medical care for gay people because of that. Anytime in public when people understand that you are gay, you are exposed to danger. People are chased away from their houses. We had 38 cases in our organisation during the last 8 months where people were chased away from their homes and jobs. I have been chased out of 4 or 5 jobs because of my sexuality. I experienced a lot of discrimination in the working places. I was arrested recently for seven days.

God knew I would become a gay

I have this moments when I ask God: “Why me? Can you please tell me the secret behind?”, because I am having such a hard time while others don’t, just because of who I am. I don’t want to complain by asking “Why me”, I rather would like God to show me the “Why?” and the way. How do I get out of these circumstances? How can I learn to deal with these ups and downs of being rejected, discriminated and violated? I didn’t choose to be this way. It was God who chose this. He knew me before I was created. He knew I would become a gay, and that I would experience a lot of challenges. Sometimes I tell people: It’s just about forgiving, forgetting, and moving on. There are some questions to which you will never ever get the answer.

The church should be a place of peace

There is a very high discrimination of gays and lesbians in church. African churches pretend that homosexuality doesn’t exist. We have a big fear of addressing this situation because we are afraid of losing the acceptance of the other church members. But who are the church members? And who are the homosexuals? There are many homosexual church members. I think it’s the right time we stop to do business as usual and to start thinking about inclusivity and welcoming. The church is a peaceful and harmonic place where there is no need to discriminate, to reject, because as Christians this is not our role. Our role is to love and to welcome. Condemning, rejecting and judging we leave to him who created us. All of us we are human being and all human beings can do mistakes.

“You will never stop me going to church!”

I used to go to church every week. But after the priest in my church understood that I am gay, he said “we don’t want to see you here anymore, because you are a sinner.” After this I still didn’t stop going to the church. Every time I was there I said to the priest: “God knows what he created. You will never stop me going to church”. But eventually I stopped going, anyway. I felt, if I continue of going to this church, it will create a distance between me and the God I believe in. It’s better to pray at home. God is everywhere and he listens from anywhere.

They eventually will have to accept us

I think there will be a big transformation whether my country likes it or not. This will happen. So it’s better for them to take a step ahead and to think differently. They eventually will have to accept and include gays and lesbians. They can put up the harshest laws, but they cannot stop people from being who they are.