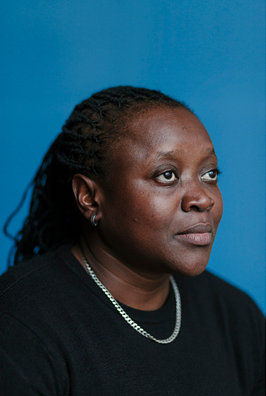 Joanita Warry Ssenfuka (35) from Uganda is a telecommunication engineer and activist.

With seven years I was attracted to my best friend. We lived together, we grew up together. With fourteen I realized that feeling is not normal, I got the definition of people who are attracted to fellow women, so I understood that I am something called “lesbian” – which I absolutely didn`t want to be! I tried so many things changing this: I prayed, I fasted. I prayed to God to many times to forgive me for –whatever, I didn`t quite know. I read some books about people going to hell because of being attracted by fellow women. That was my Catholic upbringing, so I went through all the stages as a Catholic child. I was very bitter with myself because of my feelings. I got myself a boyfriend, because I thought I might just try how it feels. But along the way I did realize that this would end up in either hating yourself or hating the other person. So I decided to stay with my true feelings and maybe not be with anyone instead, because it was a sin. I tried going to different churches, tried to take the “devil out” – but it didn’t work.

Everyone is a sinner in some way

When I realized that my feelings would never change, I started understanding myself for the first time. I told myself that God always knew that I was lesbian; from the moment on I started growing in the womb of my mother. And he did not terminate the pregnancy, anyway. So, I concluded my life has a purpose.

God said: love the sinner, hate the sin. I realized that so many are using the bible to demonize people like me. At the same time I realized: a sin is a sin. And everyone is a sinner in some way, if you lie, or if you steal, you are just a sinner like everyone else. Anyone who judges me is a sinner just like me. If it’s my mother, my brother, my sister, whoever – I don’t care. I will not let anyone judge me for who I am. It wasn’t me who decided to be a lesbian. When I started realizing my feelings I was young – I was a child! I didn’t know anything about sins. But I understood: this is me. I have always been that, and I will always be that. I started accepting myself – and it worked well! I started activism, telling myself: I have to start living on my own, and I have to help other people who are like me. So I started being open about myself and defend my position.

Uganda is a dangerous place to live for LGBT people. There are so many lesbians in Uganda who are being raped for correction. But this goes undercover, it’s silent, because most of the time, it’s done by family members. They think: “She never had sex with a man, that’s why she has sexual feelings towards fellow women.”  I wouldn’t say, this is less worse or that they are lucky because they are “just” raped and not being killed. You live with that pain for the rest of your life, especially when you can’t speak about it in public to get justice.

Your life will never be the same

The Anti-Homosexuality-Bill that first foresaw death penalty and later life-long prison was nullified, but it can come back anytime. While the legal situation changed, there is an increase in the cases: Between 2014 and 2015 there is a high increase of arrests because of homosexuality that took place. The police is still using the old colonial law against “carnal knowledge (…) against the order of natur” to arrest you, to expose you to the media. When they put you into jail, they use another reason, if any lawyer asks: like vagabondage or excitation of public nuisance: Those are the things that are written formally in your statement. When they expose you to the media, the say: “Those people are advertising homosexuality, they are recruiting our children!” After your face ran through the media and was marked as homosexual, your life will never be the same, even if the police release you. You will struggle to find a place to live. Many are disowned by their families. If you are still a kid or teenager you can never obtain any more education. If anyone in your school understands that you are gay, you will be thrown out. If you are disowned by your family, it is really hard to earn money. At that point our organisation Freedom and Roam Uganda tries to raise awareness and give skills training for members, to enable them to sustain a living.

The one positive thing is that the whole country started talking about homosexuality and everyone knows now that homosexuals actually exist. Before, so many people thought that any homosexual person cannot be from Uganda, doesn’t exist in Uganda.

Only dialogue with the church will make change possible

The church should be there to protect us, every Christian, every one, any human being. It’s their role to speak up against injustice and against violation of human rights. Instead of that, the church was part on a committee that decided to create the bill against homosexuality. So they support violence against humanity. That is so different from what it is supposed to be. We have more pastors then doctors or nurses in Uganda. We have more churches than hospitals. Many of them preach hate against homosexuals. They have a lot of followers listening to them.

To change the whole situation for LGBT people in Uganda, we need to concentrate in having dialogs with different people in Church. We have to do a lot of sensitization and work together with the church. This is what makes change possible. It’s a long journey, but step by step we will get there.