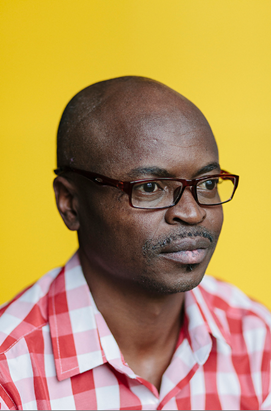 Dumisani Dube (45) is from Zimbabwe, living in South Africa. He works for an LGBT-Organization as a consultant in Zimbabwe and in South Africa, which organises “Dialogue for change”:  dialogue between the LGBT commmunity and the religious leaders. As well, he is leader of the LGBT-ministry in his Catholic parish.

Activism for gays and lesbians in the parish

I am a gay and I am catholic. I am sure I was born gay, I always knew there was something different about me. I am very lucky that I always was in parishes which are very progressive. In our parish in Johannesburg there is an LGBT-ministry, which I lead. At first, it was difficult as a leader because my telephone number was published on the leaflet in the church. The parish is directly in the center of Johannisburg where many people from many different countries come. So some people called me and accused me of promoting satanism and abomination in the church. I tried to see it as a proof of perserverance and patience, I tried to think: “Forgive them, Lord, because they don’t know what they are doing.” When we started to engage in dialogue some people have come to understand, come to accept the LGBT-community, and some people have even recommended our group to others, some even to their own children, because they have seen how we are and how we work.

Worse than pigs and dogs

In Zimbabwe, criminalisation of same-sex relationship is a big issue. It is punishable by 14 years, if you are caught in the act, or if somebody reports you. This is the law. Our former president Robert Mugabe used to say that gays and lesbians are worse than pigs and dogs, because pigs and dogs know exactly who their sexual partner is. There was lots of harassement of gay people in Zimbabwe. The office of an organisation which fights for rights of gays and lesbians was raided. Staff members were detained, some had to leave the country. The consitution criminalises homosexuality. Our goal is to strenghen humain rights, regardless of race, gender or sexual orientation.

Homosexuals are being raped, killed, blackmailed

In South Africa, there are things that need to be done politically and socially. The constitution officialley has decriminalised same-sex relationships, but still there are collective rapes of lesbians in South Africa. Homosexuals are being raped, are being killed, sexually abused, blackmailed, they loose their jobs, just because of their sexual orientation. People live “in the closet”, hide their sexuality completely. Many bisexuals are living in heterosexual relationships. People are still afraid of being out as a gay or bisexual person and afraid that they might loose their families, children, friends.

The media can destroy you

In both countries, Zimbabwe  and South Africa, the media is a big problem for the LGBT community. If there is just the rumour of someone being gay it would be an issue of interest the media, in a very negative way. They will try by all means to destroy you. In Zimbabwe there is need to train the media how to report on LGBT issues. There can be a better way. The more people read in a negative way about LGBT issues, the more people gather that anger and phobia against LGBT People – just because of what they read.

Dialogue and understanding can change a life

To make change happen, it is important now to have dialogues. Dialogues are incredibly important, they can change peoples perspectives. Dialogues can make people see what they otherwise don`t see. The sharing of experiences can change someones life. Talking with people and understand what they are experiencing can actually change someones life. We cannot expect to change everybodies mind with dialogues, though. There are people who say or do bad things out of ignorance, out of not-knowing. But there are also those people who carry on saying and doing bad things out of stubbornness. On the second group of people we have to give up and try to ignore them. With the others, we can try to show and tell them what they don´t know. And step by step, people are going to understand.