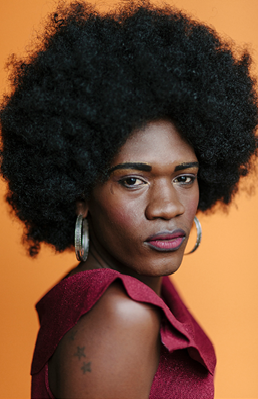 Alicia Nalunkuma (23) from Uganda is a dancer and activist for Transgender Equality. Born as a boy, she always felt a girl. Since childhood she faced massive pain and sorrow. As a practicing Christian, still the Catholic Church rejects her.

Trapped in your own body

I didn’t feel bad because this is who I am. I felt like a girl from childhood on. I used to put on dresses from my sisters, from my friends. Being a trans person starts from childhood. It feels like being trapped in your own body. But it felt so bad to be chased out no matter where you go, being discriminated.

Each school I went to, they chased me out

I didn’t go to school very long. I used to be chased out of school because of my gender identity, because people didn’t understand who or what I was, so I got problems with the teachers: Why are you acting like a woman? I was already different before, but my teachers thought it might change. But when I grew up and nothing changed, my parents even took me to the rehabilitation centre to change. I tried to adopt things, but nothing worked. I was 10 years old when I got expelled from school for the first time. After this each school I went to, they chased me out. I had to change school every year, the same things happened to me every time.

When I was expelled from school at the age of 14 years the last time, my parents got tired of it and told me “we can’t pay your school fees anymore.” That’s how I lost my education.

I was very young, I felt bad because I thought my parents would be there for me, but they couldn’t. Instead, they took me to a dancing school – a place where orphans could live and be trained as professional cultural dancers. From the moment I entered the dancing school, my parents stopped giving me any assistance.

Sexwork was the only chance I had to survive

After my rehearsals in the dancing school I dressed up and went to the streets. For some time, I was working as a waitress and dancer in a sexclub. It’s not allowed to work in such a place as a man, but I was dressed like a girl, with my hair, my dress, my highheels, everyone saw a girl in me! One night my boss came into my room, he wanted to have sex with me. I refused because I knew who I was. He tried to rape me. While we were fighting, he grabbed between my legs and felt something else than expected. He called the police and the newspaper. He did not tell the newspaper that he was trying to rape me, of course. The only thing he said: “This boy is pretending to be a woman”. I was sixteen at this time. My face was to be seen all over in the media. This was the reason why I was never employed as a dancer again. There was only one thing left: I started to do sexwork. That was the only chance I had to survive.

People in Uganda don’t make the difference between a trans person and a gay person. When I was published in news, what came up in their mind was that I am a homosexual person – which I am not, because as being a girl, I only sleep with men. Most people don`t even know what transgender means. Few years ago there were attempts to introduce the anti-homosexuality bill with life-long imprisonment for same-sex intercourse. This law was officially nullified. But still, the people use the previous laws anyway that are still in force. I was taken to jail because of being homosexual. Then, the organisation I am working for now saw the news on TV. They came for me at the police station to give me legal service. They managed to bail me out of the police. From there on, my organisation has really been there for me. Even in this time when I wanted to kill myself, they said “no, don’t kill yourself, we are many, we are like you, you will live a long life.” They have been there for me; they supported me in each and every struggle. They are like my family now, my mums, my dads, my sisters. My transgender people are like my family now.

Nobody wants to associate with trans people

A strong relationship with the neighbourhood to survive

I live in a one room house in the slums of Kampala. It’s very dangerous to live there, but the people around me they look after me. If anything happens to me, they will be there to help me. In the centre of Kampala City people discriminate us transgender people on the open streets. They slap us or say things like “we don’t want people like you in our country” or “we will kill you”. It was necessary to build a strong relationship with my neighbourhood to survive. If anyone there has any problem, I go there and help. Sometimes I come to help washing the dishes at my neighbours place, or teach their kids cultural dances.

No laws to protect trans people

In Uganda, there is a high discrimination against LGBTI people, but the situation is even worse for the transgender. We don’t have laws that really protect us. Right now, we try to do some advocacy for transgender. Apparently we have sensitized the police for trans people; with our organisation we did a lot of work to inform them about transgender issues. Since them, the police had been supportive towards transgender people in the last time. At least, they don’t arrest me anymore. Also in health facilities we are trying to raise awareness. We try to inform the health workers about the needs of transgender people, to get the right medication, for example. Now they are quite supportive. Things improve, in 20 years people will know about trans issues, everything will be ok. I do a lot of advocacy via Facebook and the community grows. I get many questions and support.

I do believe in God, but I don’t go to church

As already the police and the health issues have improved, now we can go broader. We want to sensitize the religious leaders. We tried already: We invited religious leaders to a dialogue, but when we started talking, they all went out.

I do believe in God, I am a practicing Catholic, but I am not so much into church. The last time I tried going into church, the priests stared at me with disgust. Since then, I decided to never go to church again. But when I am at home, I always pray to God.