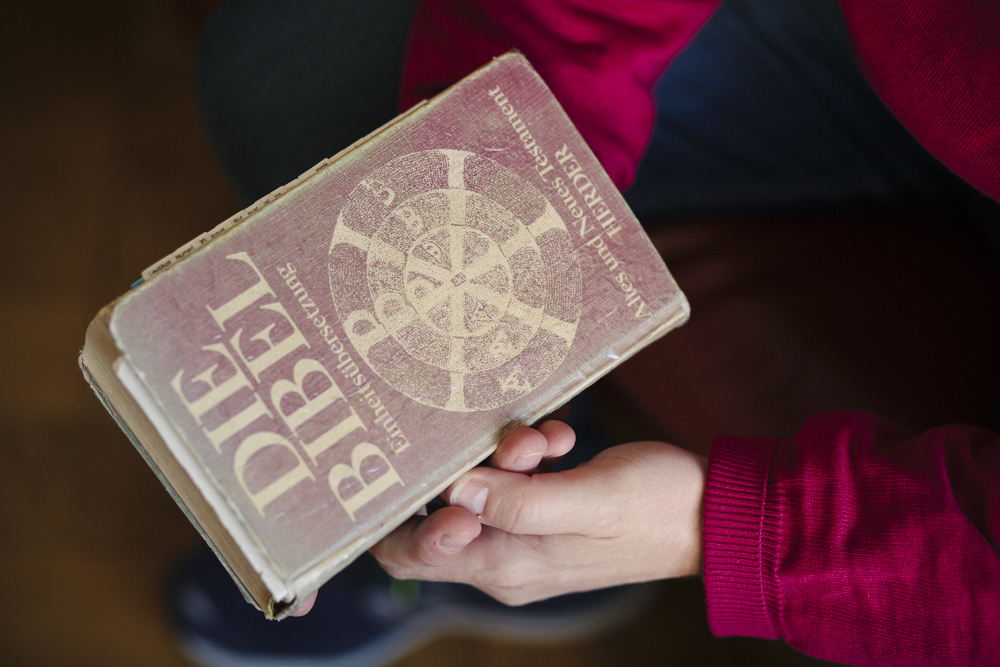 The Catholic theologian, sociologist (PhD) and religious education teacher Michael Brinkschröder is gay. Instead of turning his back on the church, he is fighting for acceptance and equality for gays and lesbians in the Roman Catholic Church.

It is the small steps that show that we are on the right way, says Brinkschröder. In 2002 he and others celebrated their first queer church service that soon became a monthly institution in Munich. By founding the Global Network of Rainbow Catholics, he established a network of LGBTIQ Catholics from around the globe. From November 30th to December 3rd 2017, a conference of almost 100 Rainbow Catholics will be held in Dachau and Munich. Under the motto “Hear a just cause,” participants at the conference will discuss how they can hone their strategy for the future. Their goal is ambitious, to say the least: They want the pontiff to openly state that all Catholics are equal – be they gay, bisexual or straight, queer or transgender – both within and outside the church.

In an interview with Corinna Mayer, Michael Brinkschröder explains how to build bridges towards tolerance and mutual understanding, and why it is worth fighting for a change within the church:

Mr Brinkschröder, you are a Catholic theologian, religious education teacher and a gay man. Do many of your students, see a contradiction in this?

When I come out to my pupils in class they realize pretty quickly that there is an unresolved dispute between me and what the church says. When they ask me if there are problems resulting from this, I answer truthfully “Yes, there are”. For example, I am not allowed to get married. As soon as I would do so, I would lose my permission to teach religious education. It happens quite often that students then side with me and express their rather critical view on the church’s position in that matter. It has been one of the cornerstones of my teaching principles that I am open for students to express criticism, for dealing with controversial points of view and to share new perspectives. My current class was bored with reading parts of the Bible. So, I suggested looking at these passages from a queer angle. They picked up on the idea immediately because they thought it would make for a more compelling reading of the Scripture. And I hope that by doing so they learn how to find a closer connection to the Bible.

When and why did you decide to fight for the acceptance of gays and lesbians within the Catholic Church?

I had been studying theology at university for some time when I realized that I was gay. This revelation confronted me with a tough choice: either to follow my professional career or to live openly as a gay man. To do both simultaneously was unimaginable to me at that time. It took me a year to make up my mind. At the end of that year it became clear to me that both aspects of my life are vital to me, my faith and my identity. That was the moment when I decided to fight. Because I was denied the chance to get a PhD in theology, I did a lot of research on the roots of the Christian homophobia within the church from a sociological perspective instead. I am proud to say that I am happy today teaching religious education and I have found my calling to do everything I can to make the Catholic Church fully accept gays and lesbians as equal members of their community.

From November 30th to December 3rd, rainbow Catholics from all over the world will gather under the motto “Hear a just cause” – taken from Psalm 17. Why did you choose this psalm?

First, we decided to take that part from the Scripture because we finally want to get heard. So far the Catholic Church has been numb to the situation of gays and lesbians within the church. This homophobic tradition that has lasted for more than 2000 years, just like the degradation of women, must come to an end. The first important step towards reaching this goal is to start listening to us. A positive example of what this could mean has been shown recently by Bishop Bode who met with transgender people and listened to their life stories. It is decisive for providing successful pastoral care to accept people the way they are and to acknowledge fully the situation they live in.

Second, we opted for this psalm because we see the criminalization of homosexuality in many countries worldwide as an appalling act of injustice. In many countries that have been majorly influenced by Christianity and whose population is predominantly Catholic, homosexuality is a crime. We want the Pope makes a clear statement on this matter and that he pleads for justice. Proven by many positive examples in the past, the Catholic Church is an important player in the civil society, an agent that contributes massively to the collective forming of a political will in many countries around the world.

Which examples of the criminalization of homosexuality worldwide do you criticize most? Where is the situation for gays and lesbians worst?

In Malawi and Cameroon the conferences of Catholic bishops asked legislators in their countries to impose more draconian measures for homosexual acts. Similarly harsh punishments for homosexuality were introduced in Uganda and Nigeria with the massive backing of the Catholic Church.

In Slovakia the church offers seminars for gays and lesbians to be “cured”. What I particularly dislike in this context is the hypocrisy of many bishops who sing a different tune once they are outside of their home country.

Looking at the level of acceptance of gays and lesbians, how would you evaluate their current situation in the church?

Sadly, the official statement is still: “Homosexual acts are a sin.” However, we are in a period of transformation. While the papacy of Benedict XVI can truly be described as an ice age for the cause of lesbians and gays within the church, we see the current developments under Pope Frances as a thaw. This means that there are signs that hint at a change. However, there have been no specific acts or statements that would help gays and lesbians practically in their everyday lives.

The fact that Germany has introduced equal marriage for gays and lesbians will hopefully lead to a change in positions within the church as well. How do you deal with criticism expressed by fellow Christians? Do you understand why some of them are so hostile towards you and your efforts?

I hardly come across open criticism. When people dislike me being gay or disapprove of my fight for gays and lesbians in the church, it is far more likely that I learn about this from others. I assume that people who strongly oppose homosexuality as a topic in general often have very personal reasons for doing so. In some cases it might be that they are afraid of their own sexuality. For others, it may have something to do with having internalized certain patterns of thought over time. I also believe that many are afraid of what might result from these changes, the threat of “a big chaos” looming ahead–the fear that their church might become Sodom and Gomorrah once homosexuality is officially tolerated.

Which specific steps do you have in mind when you talk about building bridges, how do you want toachieve a mutual understanding?

I would like people to see love a as a universal phenomenon regardless of what this actually looks like in its manifestation and irrespective of people’s gender. First and foremost, however, you have to ask yourself if it is worth trying to discuss these matters with someone. I have long given up on the hardliners. I check if the person I am talking to is generally open-minded and actually interested in the topic. If that is the case I try to build up trust with the other side by having very personal talks. At some point I start sharing stories from my life. Quoting passages from the Bible does not get you anywhere. Most lesbian and gay Christians have gone through very similar experiences of being fearful and being confronted with a wave of rejection. These stories are immensely moving since they reveal a lot about someone’s life, what they have gone through. What is sad is that I know a lot of faithful Christians who have left the church saying this institution won’t change. These people were led up the garden path by the policy of conservatives like Benedikt XVI. In reality, the church is far more dynamic and is constantly changing.

Twenty years from now what do you think the situation for gays and lesbians in the church will look like? What is your vision for the future?

My vision for 2037? That the marriage of two women or two men has not only become a holy sacrament, but that it is possible to get the church’s blessing for same-sex marriages. I hope the Catholic Church of the future openly supports and helps lesbians and gays who are seen as a normal part of religious life in many parishes worldwide. That might sound utopian to some, but this is already the case in some countries today.

What makes you so optimistic?

The fact that we already have teams of spiritual counselors for gays and lesbians in many German dioceses. Also in Austria, in the Netherlands, in Switzerland and in Great Britain huge progress has been made in the area of pastoral work.. In the US changes in this respect have gained some momentum. However, these efforts face fierce opposition from the opposite side there. Still, step by step we currently see changes for the better in many places.

As a project manager of the German initiative “Ökumenische Arbeitsgruppe Homosexuelle und Kirche – HuK” (=ecumenical task force homosexuals and church) I fight for the equality of lesbians and gays in the Catholic Church. By setting up the Global Networks of Rainbow Catholics (GNRC) we are able to make the voices of gay and lesbian Catholics from around the world heard.

If you were given the chance to address the world and everyone was able to listen to you, what would you say?

To all the disappointed Catholics I would say that it is worth fighting persistently for changes within the institution. If we were able to alter the church’s position on same-sex relationships, this would result in fundamental social changes in communities worldwide – changes that might be far more profound and deep in terms of people’s mindsets than if these changes only occurred on a legal level.

The interviewer was Corinna Mayer.

The Second Asembly of the Global Network of Rainbow Catholics (GNRC) will take place from November 30 to December 3 at the International Youth Hostel Dachau. It has the motto “Hear a Just Cause” (Ps 17,1). The meeting will start on Thursday at 15h with an opening ceremony and its highlight will be an Eucharistic celebration in the Bürgersaalkirche in Munich on Saturday at 17h. The hosts are the Ecumenical Working Group Homosexuals and Church (HuK) e.V. and the Catholic Queergottesdienst Munich.

The press conference will begin on Saturday, Dec. 2, 2017 at 3 pm with guests from Uganda, Russia, India and Brazil.