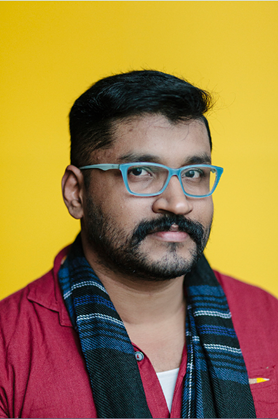 Jijo Kiriakose (33) from India finished his PhD in image processing and is now working as a research analyst. Next to his profession he is also a writer and an artist and manages an LGBT support group.

In India intimate friendships between men are accepted

I I knew I was different in terms of feeling attracted to men, when I was around ten or eleven. At that age I realised I was different. But I didn’t know feeling like that meant to be homosexual. I have the impression that where I come from having an intimate friendship with a man is accepted. It was only in my 20s or 30s when I started realizing that it was also about sexual intimacy for me. When I became a teenager my parents explained to me what I needed to know about romantic practices with the opposite sex. But as they gave no references of having same-sex relationships I was always trying to find something suitable for myself.

I enjoyed reading in the Bible

My family and I were very religious. On Sundays we first went to mass first and in the afternoon children learned about religion and talked about the bible. I was very keen on Sunday school activities and I enjoyed reading in the Bible and reciting from it. In general I was very interested in religious teachings.

Every time I had physical encounters with boys, I felt like I was doing something wrong. I was convinced all my fantasies were sinful. I started to retrieve myself from my social environment and became very lonely.

When I left my hometown in order to study I got the opportunity to research and find out more about homosexuality.

I came out to my family the night after the engagement

My parents had already set up a marriage for me which was supposed to happen after my studies. Therefore I was already engaged, but I never got married after all. I came out to my family the night after the engagement. While my father was shocked my mum took it quite well. I left my parent’s house and for the next few months I didn’t visit my family. Leaving them like that was very hard for me, because I was used to talk to them frequently. We used to talk every day. It took them one or two years to accept me the way I was when they started to realize I wasn’t going to change.

My parents still don’t like my commitment for the LGBT cause, because I am getting a lot of attention due to my writing, which is constantly published. In their point of view it is ok to be gay, but they don’t feel comfortable letting everyone know I am gay. They have to face their neighbours and the religious environment is giving them a hard time sometimes. I think my father still believes or at least hopes I will become heterosexual one day.

In India the legal system is not treating LGBT people fairly. Even though it is okay to be gay you cannot have gay sex legally. It is therefore a challenging decision for LGBT people whether to be openly gay or not. Once you are openly gay you have to stand behind it wherever you go. It is a form of activism.

In my state, Kerala, there are hardly more than 20 people openly gay and we are 30 million people. Most people, who are openly gay live outside of my state in bigger cities like Mumbai for example. It is easier in big cities like this, because nobody really cares. That is why most people once they become openly gay tend to leave my state. When you get to know someone, they will ask for my name, my profession, my age and the next question would be my marital status. If you are not married you usually have to give a reason in India. It is your decision then whether to be open or not.

No support from the Church

Concerning discrimination it is an issue to be openly gay and Christian. The problem is that you don’t have any support from the church or any church group.

We have a support group associated with the National Council of churches in India. The national board is in favour of LGBT people. They made some statements in a local context saying that being gay was okay. Now once someone is facing issues they are able to show those statements to their families for instance. I am very curious how the Global Network of Rainbow Catholics and other organizations are working. I would really love to bring this knowledge back to Catholic groups in India. It is really challenging, but we are hopeful.