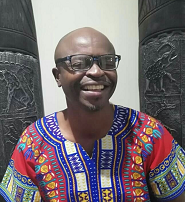 Dumisani Dube is the Board member representing Africa and Treasurer of the GNRC Board.  A Zimbabwean living in South Africa, he is the founder and Director of Dialogues for Change, a non-profit organization that seeks to facilitate dialogue between religious leaders and sexual minorities.  As a Christian and a human rights activist, Dumisani has been passionately involved in LGBTI activism for more than twenty years.  He began working for an LGBTI organization in Zimbabwe in 1998, and has a wide range of experience in campaigning for LGBTI rights in different settings, both religious and secular.

Dumisani is actively involved in issues of HIV/AIDS within the LGBTI and MSM (men who have sex with men) sectors.  Currently he is involved in training NGOs and religious sectors on the protection of Sexual Minority Refugees and the prevention of sexual and gender-based violence (SGBV).  Although the South African constitution has officially decriminalized same-sex relationships, many members of the LGBTI community continue to suffer from acts of violence, including rape, sexual abuse, and blackmail.  Dumisani is also a communications and advocacy consultant, working to improve media coverage of LGBTI issues, which can be very negative and destructive in both Zimbabwe and South Africa.

In addition, Dumisani leads the Holy Trinity Catholic Church LGBTI ministry at the parish he attends in Johannesburg.  He spoke about this experience in an interview he gave in 2019 for the Grant Me Justice project of the GNRC.

*Men who have sex with men.

“I am gay and I am Catholic.  I am sure I was born gay.  I always knew there was something different about me.  I am very lucky that I always was in parishes which are very progressive.  In our parish in Johannesburg there is an LGBTI ministry, which I lead.  At first, it was difficult as a leader because my telephone number was published in a leaflet in the church.  Some people called me and accused me of promoting satanism and abomination in the church.  I tried to see it as a proof of perseverance and patience.  I tried to think: ‘Forgive them, Lord, because they don’t know what they are doing.’ ”

“After we started to engage in dialogue, some people have come to understand, have come to accept the LGBTI community.  Some people have even recommended our group to others, some even to their own children, because they have seen how we are and how we work.” (Dumisani contribution in the Grant me Justice campaign)