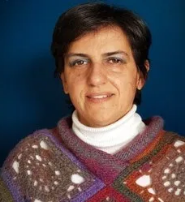 Ana de Carvalho represents the Europe Region on the GNRC Board and serves on the Board’s Finance Committee. She has been a Catholic since birth but was confirmed only as a young adult. After that, she became engaged in various Catholic volunteer projects, a prayer community, and a reflection group. In 2016, she founded a Catholic LGBTQI prayer group and from then on became more involved with the LGBTQI Catholic community.

Ana participated in the Second Assembly of the GNRC in Munich in 2017, has participated in the European Forum of LGBT Christian Groups since 2018, and is a member of the Roman Catholic working group of the European Forum. She is also a member of CaDiv (a founding member of GNRC from Portugal) and the online journal 7Margens, which focuses on the margins of religion. Born in Lisbon, Portugal, Ana is married to her companion of twenty years, has a twelve-year-old adopted son, and is an actuary in an insurance company.

Author: Jeffrey Stone with the edition and approval of Ana de Carvalho